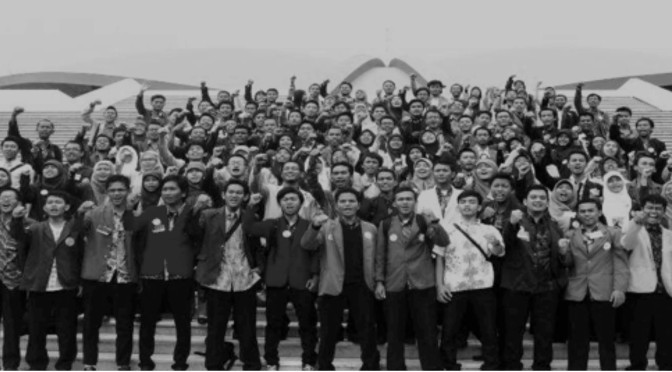 A strong nation needs competent leaders of good character, capable of achieving and inspiring greatness. With this in mind, Bank Indonesia, has for decades been nurturing some of Indonesia’s most promising young talent through the provision of scholarships.

But talent alone is nothing without dedication to the nation. Therefore, BI in 2011 decided to broaden the impact of its education program by setting up a community called Generasi Baru Indonesia (New Indonesian Generation, GenBI). This initiative provides BI’s scholarship recipients with training and soft skills to become future leaders, capable of engaging and empowering the public.

The program teaches young people to become independent, creative and innovative, as well as inspiring their sense of nationalism, so they will become responsible for the future success of their country. Recipients learn to work in partnership with different organizations and levels of government, conducting activities that help to close the socio-economic gap.

Members of GenBI have diverse backgrounds of expertise and specialization. Their abilities and insights are broadened to address future local, national and even global challenges. For example, members have undertaken initiatives to combat poverty, raise environmental conservation, and improve health and hygiene.

The GenBI program is not elitist but is based entirely upon merit. Members undergo self-improvement and acquire values on how to inspire a peaceful, tolerant and inclusive society, while enhancing national growth and competitiveness. Internship opportunities are provided in Bank Indonesia and in respected national and multinational corporations.

Bony Prawira, a student of economics at Jakarta State University, says GenBI has taught him that it’s never too early for the young generation to start making positive social change. “Before being educated in GenBI, my social spirit was lacking,” he says. “I always thought I was not ready to help others. Once in GenBI, I realized we did not need to be perfect to help others. What is important is the intention and the will.”

Rifki Budianto Arif, who became a member of GenBI while studying law at the University of Indonesia, says the program enabled him to become involved in various social activities, such as encouraging communities to adopt better health and hygiene practices.

“We received assistance not only in the form of scholarships, but also through training as prospective entrepreneurs. This fostered a sense of social responsibility through positive activities,” says Rifki, who is now a researcher at the government’s Financial Services Authority. He says these valuable experiences could not be obtained from attending university lectures.

In West Kalimantan province, GenBI is combating the serious problem of coastal erosion. Members joined forces with a local conservation group to plant 13,000 mangroves after wave erosion carved a small island from the mainland. Local GenBI chairman Ivan Dermawan says the planting was hard work, but a valuable lesson in engaging communities to protect the planet. Such lessons cannot be learned in books but are typical of the real-life experiences provided by being part of GenBI.

In the South Kalimantan capital of Banjarmasin, GenBI focuses on preserving cultural heritage, including a local woven textile, sasirangan, which had been at risk of extinction. “We want to give the public a love of their own culture,” says GenBI member Jaenudin. “There was no continuity for sasirangan. If not us, then who else?” In preserving culture, there are economic opportunities that benefit low-income households.
GenBI has harnessed the high energy and enthusiasm of Indonesia’s brightest youths, putting the country’s future in good hands. With the right leaders who care for the people and the environment, all Indonesians will benefit.